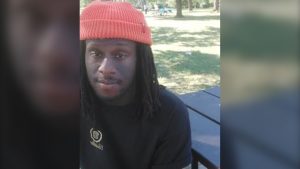 Toronto police say the search is still ongoing for Raheem White after he went missing 3 weeks ago.  White went missing on December first from the Osler Street and Pelham Avenue area, close to the Junction. His work vehicle was found shortly after which had his wallet and other personal belongings in it.

Police say they have conducted multiple comprehensive searches involving the K9 unit, Marine Unit to search shorelines and the Public Safety unit which deployed a drone to search the area.

At least eight sightings of Raheem have been reported to police since he went missing, but according to police, none have been confirmed after being investigated with video canvassing.

Rose White, Raheem’s mother, says she has struggled to get updates from police on Raheem’s case and has even reached out to an advocate to help her navigate the police system.

Raheem is described as being six feet tall with an athletic build. He has brown hair in dreadlocks, brown eyes and was last seen wearing a black jacket, black pants, an orange toque and a black backpack. Raheem also has a palm tree tattoo on his left bicep, and a rose on his shoulder.