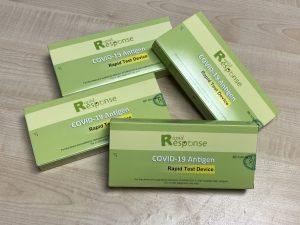 amid record-breaking coronavirus infections in the province.

Officials say the province has procured 65 million RATs in December

and January, which will be prioritized for health care and congregate

forming at pop-up sites, including LCBO locations and malls that were

handing out free RATs in the Greater Toronto Area.

The government has been heavily criticized for the scarcity of tests

available and the lack of organization with distributing the tests,