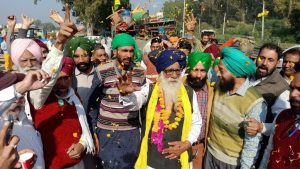 Tens of thousands of farmers clear protest sites on the outskirts of New Delhi as the government repeals agricultural reforms in a rare retreat.

Thousands of Indian farmers have packed their belongings and dismantled tent cities on the outskirts of Delhi as they headed home following a year-long protest against the government’s agriculture policies.

Hundreds of farmers danced and celebrated the victory early on Saturday as they began removing roadblocks and dismantling thousands of makeshift homes along major highways.

They lit firecrackers, hugged each other and distributed sweets as blaring loudspeakers played patriotic and revolutionary songs dedicated to the agitation.