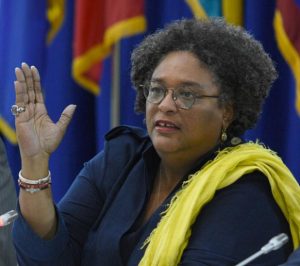 In Barbados, a former Government Senator Lucille Moe has expressed fears about Prime Minister Mia Mottley being given another mandate to run Barbados’ political affairs.

Moe, who served as Minister of Information, Broadcasting and Public Affairs in Mottley’s administration up to July 2020, says she has known the Barbados Labour Party leader for over 50 years, considered her a “little sister” and had been very protective of her over the years.

However, Moe says she had no choice but to disassociate herself from her erstwhile friend. Moe said she believes in democracy and that power had changed the Mottley she knew.

Barbadian Journalist Wendell Callender who was a guest on Sunday’s GTA-UPCLOSE talk show here on G987 weighs in on the political controversy.

Voters in Barbados will be heading to the polls in general elections on Wednesday.