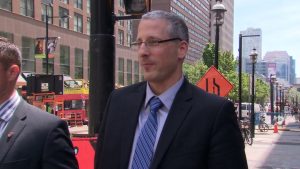 Many in the Black community with be keeping an eye on this case involving a Toronto Police detective who is facing disciplinary proceedings, accused of making inappropriate race-based and sexual comments at a murder scene that were caught on body camera video.

The remarks by Detective Christopher Hominuk were discovered as another officer reviewed body camera footage in the first-degree murder case in the death of 22-year-old Jovahn McKnollys, who was fatally shot in an Etobicoke plaza last summer.

It’s not the first time that Hominuk has been accused of misconduct caught on police cameras.

Nigel Bariffe of the Urban Alliance on Race Relations said in an interview with G987, he would be surprised by Hominuk Comments.

In 2010, he was recorded by a camera in the back of a police cruiser threatening to taser a suspect in the genitals if that person didn’t provide information. The taser was not discharged and the man was not injured.

At that time, Hominuk pleaded guilty to discreditable conduct. He was convicted in court of threatening bodily harm but was granted a conditional discharge as the judge accepted evidence that his diabetes played a role. He hadn’t slept the night before, he hadn’t eaten recently and he had low blood sugar.

Hominuk kept his job but was busted from first class to second class constable for a year.